The original Muirhouse brewery pump clips were red and yellow and behind the name of the beer is the Scottish Muir Tartan however the pump clips have now changed to have the 3 bands black,red and yellow which are the bands that are on the brewery's metal casks. 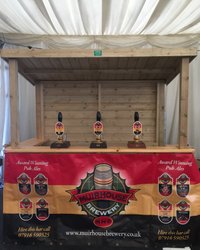 This is one of the 2 bars that the brewery offer to lend out for usethis is typically known as a shed bar as it is put together and made with same material as a shed.

The Muirhouse brewery started on a 100 litre plant in our family garage with brewing taking place every week on a Sunday.

It was named the Muirhouse Brewery because Richard's(The Owner) surname is muir and was brewed in his house's garage.

We supplied pubs and beer festivals and the feedback was fantastic and we won some awards.

The decision was made to purchase a 2 BBL brewery from 3Bs brewery in Blackburn and a unit was taken on to house it in.

As time pushed on this proved not to be big enough to meet with demand so a bigger plant was purchased and currently beers are brewed on a 4BBL scale twice a week.

We brew beer with a passion to create great products full of flavour after all our name is on the pump clip. We endeavour to go up and above to give our customers a great service, great beers with guest beers alongside our own.

We also supply racking and cooling if you are having a beer festival we can help with the set up and supply of beers.